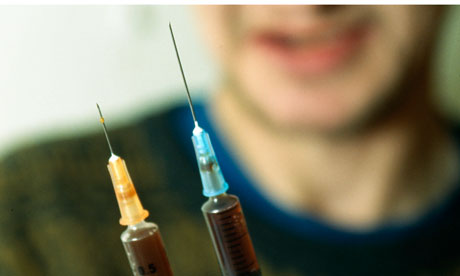 Experts say turning point had been reached in England's heroin epidemic, with fall particularly sharp among the under 30s

Young people in England are turning their backs on the most dangerous illegal drugs for the first time in 30 years, according to the head of the national treatment agency.

New figures show that the total number of drug users entering treatment for heroin or crack cocaine has fallen by 10,000 over the past two years.

The official data shows that the fall in heroin use is particularly sharp among under 30s with the number of 18-24 year olds in treatment more than halving and the 25-29 age group almost matching this fall.

Drug treatment experts say that they are "cautiously optimistic" that the heroin epidemic which has gripped Britain since the 1980s may have finally passed its high water mark.

Paul Hayes, NTA chief executive, said the new figures which also show an 18% rise in the number of people officially defined as "recovering from addiction" were an indication that the trend was moving in the right direction. "We're a goal up, but it's not half time yet. I think what it shows is that we've probably passed the high water mark of the impact of the epidemic of the late 80s and 90s," he said.

Hayes said that the once popular images of "heroin chic" and the Trainspotting culture were no longer fashionable and young people instead see the damage heroin and crack use has done to their older siblings and, in some cases, their parents.

"If you see people in your community who actually can't cope because of heroin and crack use. If you increasingly see heroin and crack dependency concentrated among the people in society who do life least well, as that becomes apparent, it's difficult to see it being fashionable or chic."

But he warned that the onset of the heroin epidemic that scarred the late 1980s and 1990s on the back of a sharp rise in youth employment could yet return. "We need to be vigilant that if we see a rise in youth unemployment that it doesn't lead to a return to 1980s level of heroin use. It is not inevitable but we have to watch the situation very closely," said Hayes.

The annual budget for drug treatment has risen to £600m a year from £200m a decade ago.

Harry Shapiro of the DrugScope, the independent drugs information charity, agreed that a real turning point had been reached in England's heroin epidemic: "Things seem to moving in the right direction. The figures are showing an absolute decline in the heroin using population in Britain for the first time since the late 1960s."

He said that was confirmed by the ageing nature of the heroin using population and the fact that young people's treatment services were now dealing with many more people with alcohol and cannabis problems than heroin.

Shapiro said significant successes by the Turkish authorities in disrupting the traditional flow of heroin into Europe from Afghanistan via Iran had also played a role.