An automated analyser is a medical laboratory instrument designed to measure different chemicals and other characteristics in a number of biological samples quickly, with minimal human assistance.

These are machines that process the bulk of the samples going into a hospital or private medical laboratory. And the results should be out as quickly as possible. There will often be a method that can get urgent specimens moved more quickly through.

The types of tests required are often enzyme levels (such as many of the liver function tests), ion levels (e.g. sodium and potassium), and other tell-tale chemicals (such as albumin or creatinine).

Simple ions are done with ion selective electrodes, that let one type of ion through, and measure voltage differences. Enzymes are measured by the rate they change one coloured substance to another; the results for enzymes are given as an activity, not a concentration of enzyme. Other tests use colorimetric changes to determine the concentration.

Turbidity (as created when an antibody reacts with a test compound) can also be measured with these machines.

Examples of these types of machines are:

Many methods of introducing samples into the analyser have been invented. This can involve placing test tubes of sample into racks, which can be moved along a track, or inserting tubes into circular carousels that rotate to make the sample available. Some analysers require samples to be transferred to sample cups. However, the effort to protect the health and safety of laboratory staff has prompted many manufacturers to develop analysers that feature closed tube sampling, preventing workers from direct exposure to samples.

Samples can be processed singly, in batches, or continuously.

The automation of laboratory testing does not remove the need for human expertise (results must still be evaluated by medical technologists and other qualified clinical laboratory professionals), but it does ease concerns about error reduction, staffing concerns, and safety.
Routine biochemistry analysers
These are machines that process a large portion of the samples going into a hospital or private medical laboratory.
Automation of the testing process has reduced testing time for many analytes from days to minutes. The history of discrete sample analysis for the clinical laboratory began with the introduction of the "Robot Chemist" invented by Hans Baruch and introduced commercially in 1959.

The types of tests required include enzyme levels (such as many of the liver function tests), ion levels (e.g. sodium and potassium), and other tell-tale chemicals (such as glucose,serum albumin, or creatinine).

Simple ions are often measured with ion selective electrodes, which let one type of ion through, and measure voltage differences.
Enzymes may be measured by the rate they change one coloured substance to another; in these tests, the results for enzymes are given as an activity, not as a concentration of the enzyme. Other tests use colorimetric changes to determine the concentration of the chemical in question. Turbidity may also be measured.
Immuno-based analysers

Because many substances (such as hormones or drugs) have no colour, and cannot cause another substance to change colour, antibodies must be used to detect them.The concentration of these compounds is often to low to cause a measurable increase in turbidity when bound to antibody, so other, more specialised, methods must be used.
Examples of these analysers include: Blood counting machines sample the blood, and pass it through a thin tube, counting the number of cells going past, and calculating their size.

Automated coagulation analysers first add calcium to a sample (which undoes the anticoagulant) then trigger it to clot, measuring the amount of time it takes to do so.

Automatic ESR readers, while not strictly analysers, hold a rack of samples for an hour, then after an hour determine how far the red cells have fallen, by detecting levels with light beams.
Examples of full blood count machines are:

Automated cell counters sample the blood, and quantify, classify, and describe cell populations using both electrical and optical techniques. Electrical analysis involves passing a dilute solution of the blood through an aperture across which an electrical current is flowing. The passage of cells through the current changes the impedance between the terminals (the Coulter principle).[4] A lytic reagent is added to the blood solution to selectively lyse the red cells (RBCs), leaving only white cells (WBCs), and platelets intact. Then the solution is passed through a second detector. This allows the counts of RBCs, WBCs, and platelets to be obtained. The platelet count is easily separated from the WBC count by the smaller impedance spikes they produce in the detector due to their lower cell volumes.

Optical detection may be utilised to gain a differential count of the populations of white cell types. A dilute suspension of cells is passed through a flow cell, which passes cells one at a time through a capillary tube past a laser beam. The reflectance, transmission and scattering of light from each cell is analysed by sophisticated software giving a numerical representation of the likely overall distribution of cell populations.

Reticulocyte counts can now be performed by many analysers, giving an alternative to time-consuming manual counts. Many automated reticulocyte counts, like their manual counterparts, employ the use of a supravital dye such as new methylene blue to stain the red cells containing reticulin prior to counting.[5] Some analysers have a modular slide maker which is able to both produce a blood film of consistent quality and stain the film, which is then reviewed by a medical laboratory professional.
Coagulometers 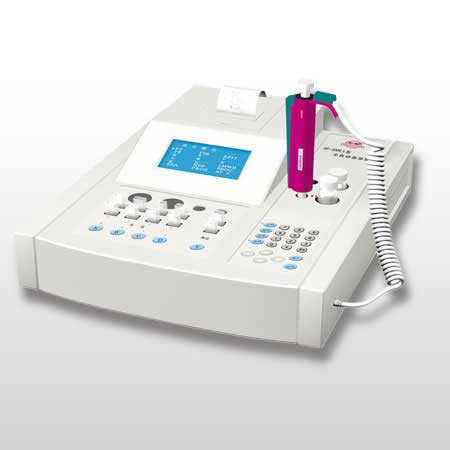 Coagulometers require blood samples that have been drawn in tubes containing sodium citrateas an anticoagulant. These are used because the mechanism behind the anticoagulant effect of sodium citrate is reversible. Depending on the test, different substances can be added to the blood plasma to trigger a clotting reaction. The progress of clotting may be monitored optically by measuring the absorbance of a particular wavelength of light by the sample and how it changes over time.
Other haematology apparatus
Automatic ESR readers, while not strictly analysers, hold a rack of samples for a set period of time, after which the reader determines how far the red cells have fallen by detecting levels with light beams.

As ESR tests become less popular they are being replaced by plasma viscosity tests. The advantage of this test over ESR is that fewer variables can affect the result, so it can give a more direct impression of the plasma protein content of a sample. Analysers that measure plasma viscosity commonly work by drawing a small sample of plasma through a narrow capillary using a constant pressure and measuring the time taken for the sample to move a
Miscellaneous Analysers

Some tests and test categories are unique in their mechanism or scope, and require a separate analyser for only a few tests, or even foronly one test. Other tests are esoteric in nature—they are performed less frequently than other tests, and are generally more expensive and time-consuming to perform. Even so, the current shortage
of qualified clinical laboratory professionals has spurred manufacturers to develop automated systems for even these rarely performed tests.

Analysers that fall into this category include instruments that perform:

How Haematology Analysers Are Used in Biotechnology Applications
Different Types Of Biochemistry Analysers Used In The Lab
Use Of Auto Analysers In Blood Testing
AUTOMATED ANALYSERS.pdf
Automated immunoassay analysers.pdf
Evaluation and Use of Coagulometers.pdf
Protocol for the Evaluation, Validation, and Implementation of Cuagulometer.pdfs