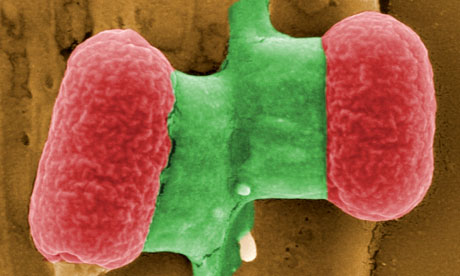 An eight month e coli outbreak in the UK was not publicised as authorities were unsure of the source. Photograph: Reuters

An eight-month E coli outbreak across the UK left 250 people ill and one dead but was not publicised at the time because its origins were unknown, health officials say.

After six months of investigations the infection was ultimately linked to people handling loose raw leeks and potatoes in their homes, said the Health Protection Agency (HPA), which has only now acknowledged the outbreak.

The cases began last December and continued until July. In total 250 victims – 100 of them under 16 – were left sick with vomiting and diarrhoea. Of those, 74 needed hospital treatment, including four who developed a rare digestive disorder which can lead to kidney failure in children. One unnamed patient, who the HPA said had underlying health problems, died.

The four were treated for haemolytic uraemic syndrome, a serious but rare complication of E coli infection, although most people recover from it.

In each of the past three years an average of 81 people across the UK have been infected with E coli 0157 PT8.

An initial inquiry, which asked all those affected about their food intake and places they had visited, proved inconclusive. Unlike other E coli outbreaks it was not possible to identify one source for the outbreak, such as a commercial or children's farm, or food producer.

"Our study showed a statistically significant association with raw loose leeks and potatoes from sacks, but these vegetables may not be the only source of contamination," said Dr Bob Adak, an HPA gastrointestinal expert who led the multi-agency outbreak control team that investigated it.

Soil on the vegetables is thought to have been the likely source of the E coli bacteria. "In this outbreak, which is now over, the vegetables could have carried traces of contaminated soil. It is possible people caught the infection from cross-contamination in storage, inadequate washing of loose vegetables, insufficient hand washing after handling the vegetables or by failing to thoroughly clean kitchen equipment, utensils or surfaces after preparing the vegetables."

A spokeswoman said the HPA did not alert the public to the ongoing outbreak because they did not know where it had originated and therefore could offer no useful public health advice.

"At the outset it was not clear what was causing the outbreak and we had no information that would have enabled the public to take any steps to protect themselves," she said. "It was only following extensive and complex epidemiological investigations and analysis that a cause emerged.

"Although the outbreak is over, we feel it is still important to share our findings with the public so that they can take the appropriate action to guard against any possible recurrence.

"As the number of new cases had declined significantly by June, and there was not an immediate need to issue a health alert to the public, we waited until FSA's customary consultation processes with industry and consumer organisations were completed before making this information public.

"During the upcoming autumn and winter months, people are more likely to be using these types of vegetable in their cooking, so it was also decided that now was the right time to make this information public."

Dr Andrew Wadge, chief scientist at the Food Standards Agency (FSA), which was also involved in the outbreak control team, said: "It's sadly a myth that a little bit of dirt doesn't do you any harm; soil can sometimes carry harmful bacteria and, although food producers have good systems in place to clean vegetables, the risk can never be entirely eliminated. Control of infection from E coli O157 relies on an awareness of all potential sources of the bacteria and high standards of hygiene where it may be present.

"This outbreak is a timely reminder that it is essential to wash all fruits and vegetables, including salad, before you eat them, unless they are labelled 'ready to eat', to ensure that they are clean. It is also important to wash hands thoroughly as well as clean chopping boards, knives and other utensils after preparing vegetables to prevent cross contamination", Wadge added.

• This article was amended on 29 September 2011 to correct one reference saying that 74 people were treated for haemolytic uraemic syndrome.